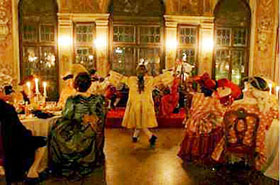 First noted in Italy during the 15th century Renaissance, Masquerade balls were costumed public festivities that were particularly popular in Venice. They were generally elaborate dances held for members of the upper classes, and have been associated with the tradition of the Venetian Carnival.

Masquerade balls became common throughout mainland Europe in the seventeenth and eighteenth centuries. A Swiss count is credited with having introduced the Venetian fashion of a semi-public masquerade ball to London in the eighteenth century, with the first being held at Haymarket Opera House. Throughout the century the dances became popular, both in England and then Colonial America.

Its prominence did not go unchallenged; a significant anti-masquerade movement grew alongside the balls themselves. The anti-masquerade writers stated the events encouraged immorality and “foreign influence”. While the writers were sometimes able to persuade authorities toward their views, enforcement of measures designed to end masquerades were not successful.